When you work with a family law attorney to divide your marital property, they’ll have the experience to knowledgeably assess each item of property. Then, your attorney will be able to determine whether the item or asset is community or separate property. They will then advise you on how you and your ex can divide that property during your legal separation or divorce. 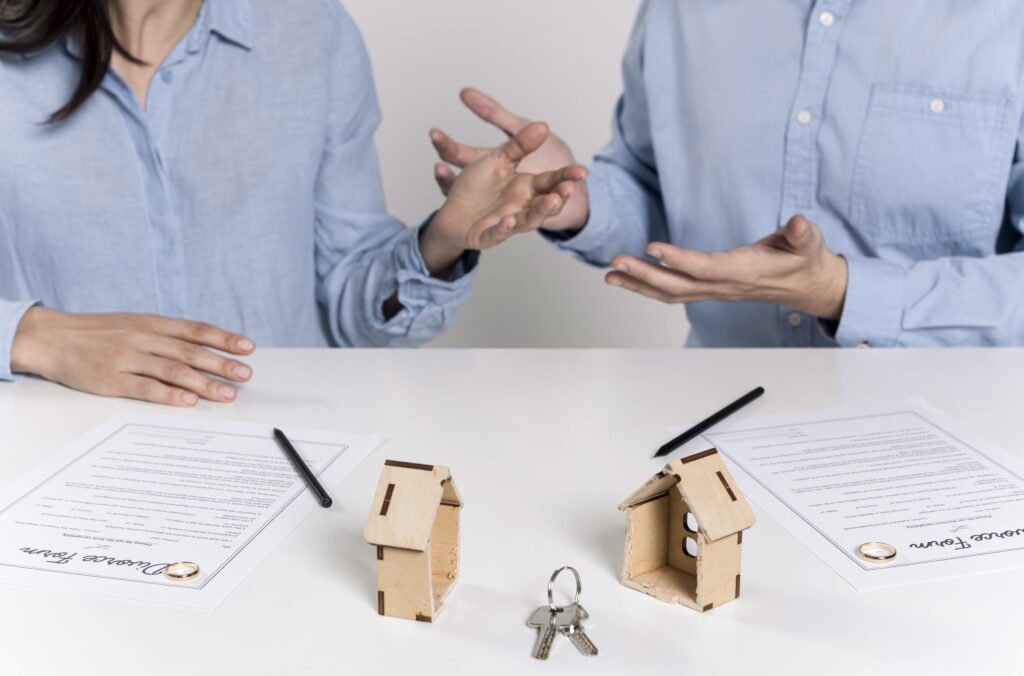 How Do You Divide Community Property in Orange County?

According to the state of California’s Family Code 760, if it isn’t provided via statute, any property, be it real or personal, that a marriage person acquired during the course of the marriage while the two are living together in the state is considered community property.

This may seem like a relatively simple statement at first read. However, much is being said in that brief sentence. To begin, in California, community property can refer to either real property (meaning real estate) or personal property (everything else). It doesn’t matter where that property is located or at what point in the marriage it was acquired.

Nonetheless, the process doesn’t end there, and it’s not that simple. Here are a few things to remember about community property division in California:

What Are the Different Types of Community Property?

Here are some of the most common forms of community property that might be acquired during marriage:

Other items with the potential to be considered complete or partial community property are:

Does Federal Law Have an Impact on Property Division?

In instances where the property exists as part of federal law, then that law may end up preempting California community property laws. For example, if the property is in some way protected by federal law, how this property is divided during a legal separation or divorce will likely be affected. Otherwise, property division is dictated by the California Family Code.

How Is Property Divided in a Divorce?

Once your assets have been categorized into either the “community property” or “separate property” category, several methods might be used to enact the division. For example:

Most divorces consist of a combination of the above methods and other methods, as required. At the end of the day, it all hinges on the unique circumstances and facts of your divorce.

An example would be in the case of a car purchased with money inherited from a deceased relative. Even if the car were acquired during the marriage, it would still be considered separate property rather than community property.

Notably, if an item is acquired following the date of separation, it will also be considered separate property—this includes income and new funds earned. For this reason, in California, the separation date can be a vital element to fairly determining what constitutes separate property.

It is also possible for debts to be deemed separate property.

California’s designation as a community property state doesn’t just impact how assets are divided during a divorce or legal separation. Also affected is any debt that was acquired during the marriage. Thus, debt can be considered to belong equally to both parties.

If the divorcing parties haven’t entered into their own agreement regarding debt and property division (such as a prenuptial agreement), the court will divide debts and community property equally between both parties. Each asset might not be divided perfectly in half, but ultimately, the goal is to create an overall equal division.

Whenever a debt is divided, the first step is determining that debt’s character—community or separate. Generally speaking, community debts will be those acquired sometime after marriage but prior to the date of separation. Even if these debts were incurred by one party (for example, maybe only one party signed the credit card slip), the debts will still be considered community property and will be split equally between each party.

For instance, if at some point during the marriage a party purchased children’s clothing and various necessary items using a credit card in only their own name, both parties will be equally responsible for any charges to that card.

Determining the Date of Separation

Whether in property or debt division, determining a couple’s specific date of separation isn’t always straightforward. However, it can be crucial to the case and its actual outcome. In fact, in some instances, the court may require a separate trial to determine the most accurate date of separation. Until this is completed, they may be unable to proceed with dividing the assets.

California law has established a two-step test to determine an official date of separation:

Occasionally, assets will be considered both separate and community property, to varying degrees. This is sometimes referred to as “co-mingling.” Determining the specifics of the division between community and separate can quickly grow complicated—but, it doesn’t have to be a perfect 50/50 split.

A typical instance of mixed property occurs with pensions and retirement benefits, assuming the relevant spouse held that job before (and during) the marriage. Any contributions made to the pension before the marriage, by whichever spouse, are considered separate property. However, contributions made to the pension during the marriage are deemed community property. Thus, this is a case of mixed separate and community property, which won’t necessarily offer an equal split during division.

How Do You Divide Assets in a Legal Separation?

For many couples, a legal separation is a viable alternative to divorce. However, even if a couple opts for a legal separation in California, much of the formalities of divorce remain intact. As such, the asset division will be treated like the couple were divorcing.

Why Hire an Experienced Family Law Attorney for Property Division?

For over four decades, DeArmey Law has proudly served the Orange County area. Our goal is to help work our clients through their personal challenges in a way that doesn’t burden them with additional stress. The legal system can be complex; whenever someone chooses to represent themselves in court, that person soon finds themselves in over their heads. Plus, in these instances, people are far less likely to see a favorable outcome for their case—this certainly applies to instances of property division, as this area is far from a black and white issue. You’ll need someone who understands the details and the intricacies to see the fairest outcome of your trial.

Are you undergoing property division proceedings, following a divorce or a legal separation, in the Tustin or Orange County areas? You need compassionate and experienced attorneys by your side. Contact a skilled family law attorney at DeArmey Law today.